The ancient province of Harima (currently – the southwestern part of Hyogo Prefecture) has been known for having excellent papermaking technology since the Nara period.
The name of “Harima-Keishi” (Harima light paper) was found in the Shosoin-monjo document “Shakyo Kanshi-Ge” in the 9th year of the Tenpyo era (737), and then many types of paper named after the province of Harima, such as “Harima medium thickness paper” and “Harima thin paper” appear one after another. It has also been recorded that orders of 10,000 sheets in the 16th year of Tenpyo (744) and of 17,000 sheets in the 18th year of Tenpyo were given to the Harima province. During that period, there were nearly 20 provinces throughout the country that had paper manufacturing, but it is clear that Harima was one of the leading papermaking regions.
According to a paper survey by Shosoin conducted in 1960-61, it is reported that the paper used in the “Harimanokuni Shozeicho” (Report of Revenue and Expenditure of the Harima Provincial Government) submitted by the governor of Harima in the 18th year of Tenpyo (746) was a product of a much more advanced technology compared to paper from other regions, revealing the superiority of the Harima paper.

The roots of the Sugihara paper are in this region

The Sugihara paper, which is believed to have been born in Sugiharadani situated in the northern part of Taka-cho, is considered to be a type of Japanese paper which is based on the technology and traditions of the ancient Harima paper.
The first appearance of the Sugihara paper in literature was in the 4th year of the Eikyu era (1116) in the text of a diary called “Denryaku” written by the Counselor Fujiwara Tadazane. The text says that Tadazane gave to his daughters and sons each 100 bundles of “Sugiharasho paper” along with precious household items. The fact that this paper was given along with the family heirlooms of the Fujiwara family suggests that the Sugihara paper was the finest paper at that time.
At that time, Sugiharadani was the estate of the family of Fujiwara Sekkan and was called “Sugiharasho”, and it is thought that the paper produced there was named the “Sugiharasho paper.” (The character “椙” for sugi will later change to “杉”.)
Based on the above, it is considered that the origin of the Sugihara paper is related to the Harima paper. 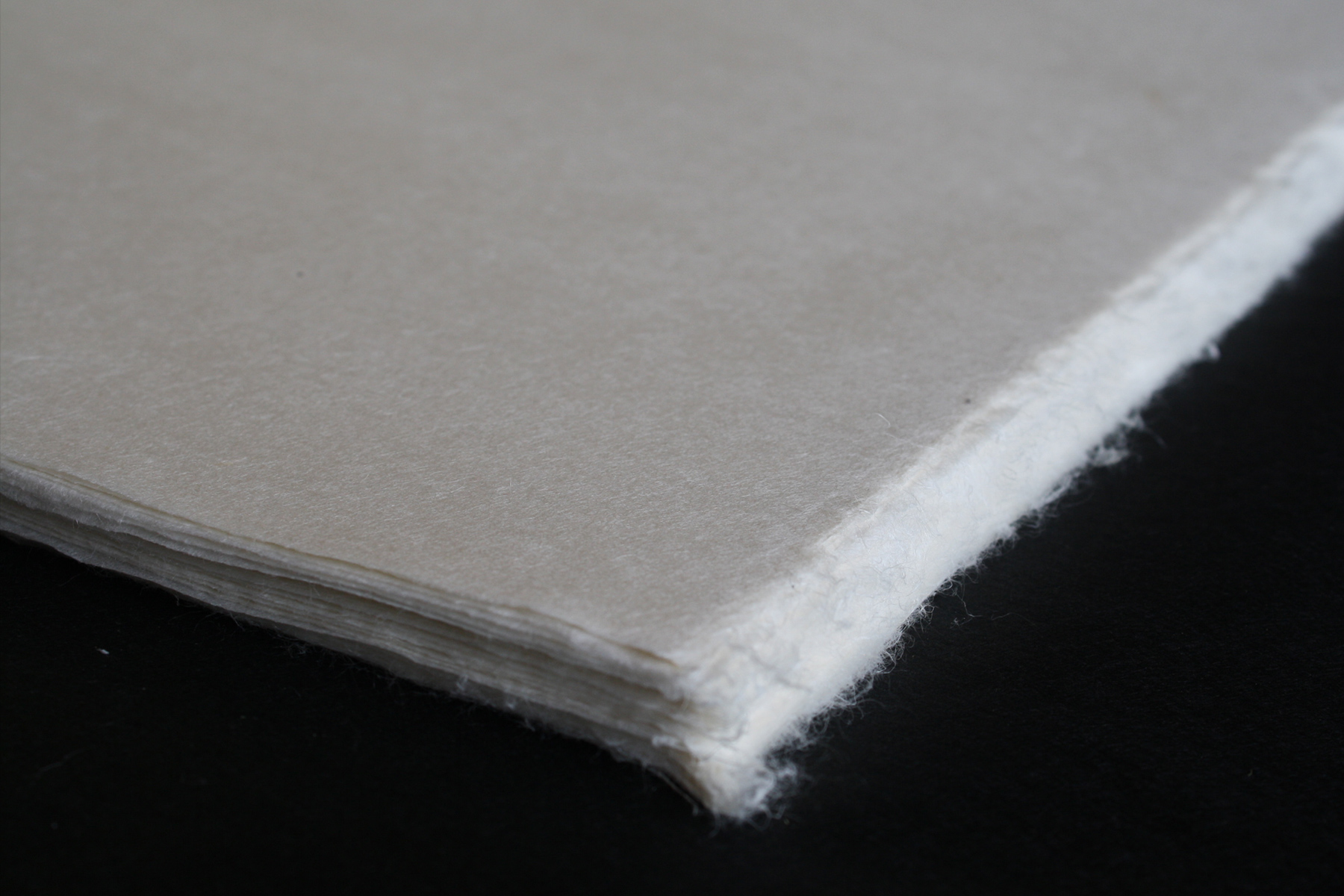 The most common use for the Sugihara paper which was used mainly in Kyoto during the Heian period was for gifts and offerings in the form of paper bundles and fans. During the Kamakura period, when it expanded into the eastern part of the country and began to be used as the official paper of the Shogunate, it gradually spread in the samurai society, and it was even said that “the samurai must not write on any other paper than the Sugihara paper”.
From the middle of the Muromachi period as the demand for paper continued to increase, the production levels in Sugiharadani alone could not keep up with it, so other types of paper similar to the Sugihara paper began to be produced nationwide using mulberry as the raw material. Different types of paper with names such as “… (place of production) Sugihara” which included the name of the province of production got had spread throughout the country, and “Sugihara” became one of the representative brand names for Japanese paper with the word “Sugihara” automatically being recognized as something which stands for the Sugihara paper.
In the Edo period, it becomes widely used in daily life by ordinary people and its levels of production and popularity reach their peak. The exceptional high-quality paper grades such as those used in offerings and so on are only produced in Sugiharadani.
There were other areas in Taka-cho where the Sugihara paper was produced. Miharadani (the Mihara valley) which used to be in the present Yachiyo-ku Yamato district of Taka is one of them. In response to a rapid growth in demand for the Sugihara paper, it was being actively produced during the final years of the Muromachi period and was also called the “Mihara paper”.

The Sugihara paper which had enjoyed such high popularity will also gradually decline as a product after reaching its production peak in the 18th century.
After the Meiji Restoration, as the industrial revolution progressed, more and more people started to shift to jobs in other industries with higher profitability than the papermaking industry. In addition, as the areas with mixed forests gradually decreased due to expanding artificial afforestation projects, mulberry, which is the raw material, could not be supplied locally any longer, so there was a need to buy it from other production areas. As a result, shipping and production costs increased, making the business of some papermakers unprofitable.
Furthermore, the decline was spurred by the fact that the machine-based papermaking method invented in Europe had come to Japan. When the Western paper industry became full-fledged and its products spread rapidly as a substitute for the Japanese paper, the production volumes of hand-made washi drastically went down across the country which had definitely affected Sugiharadani. In Miharadani, the papermaking industry disappears completely at the end of the Meiji era.

The light of the Sugihara paper finally disappears

When production using mulberry came to a turmoil, papermakers began mass-producing Japanese writing paper used for calligraphy from mitsumata (Oriental paperbush), which grows even in the shades of cedar and cypress groves. At one time it even seemed that it had become a lively papermaking village again, but that did not last long.
The tradition of the Sugihara paper which was inherited from the ancestors had continued to be preserved, but slowly one business closed after another, so finally the long history of papermaking in Sugihara came it its end in the 14th year of the Taisho era (1925). 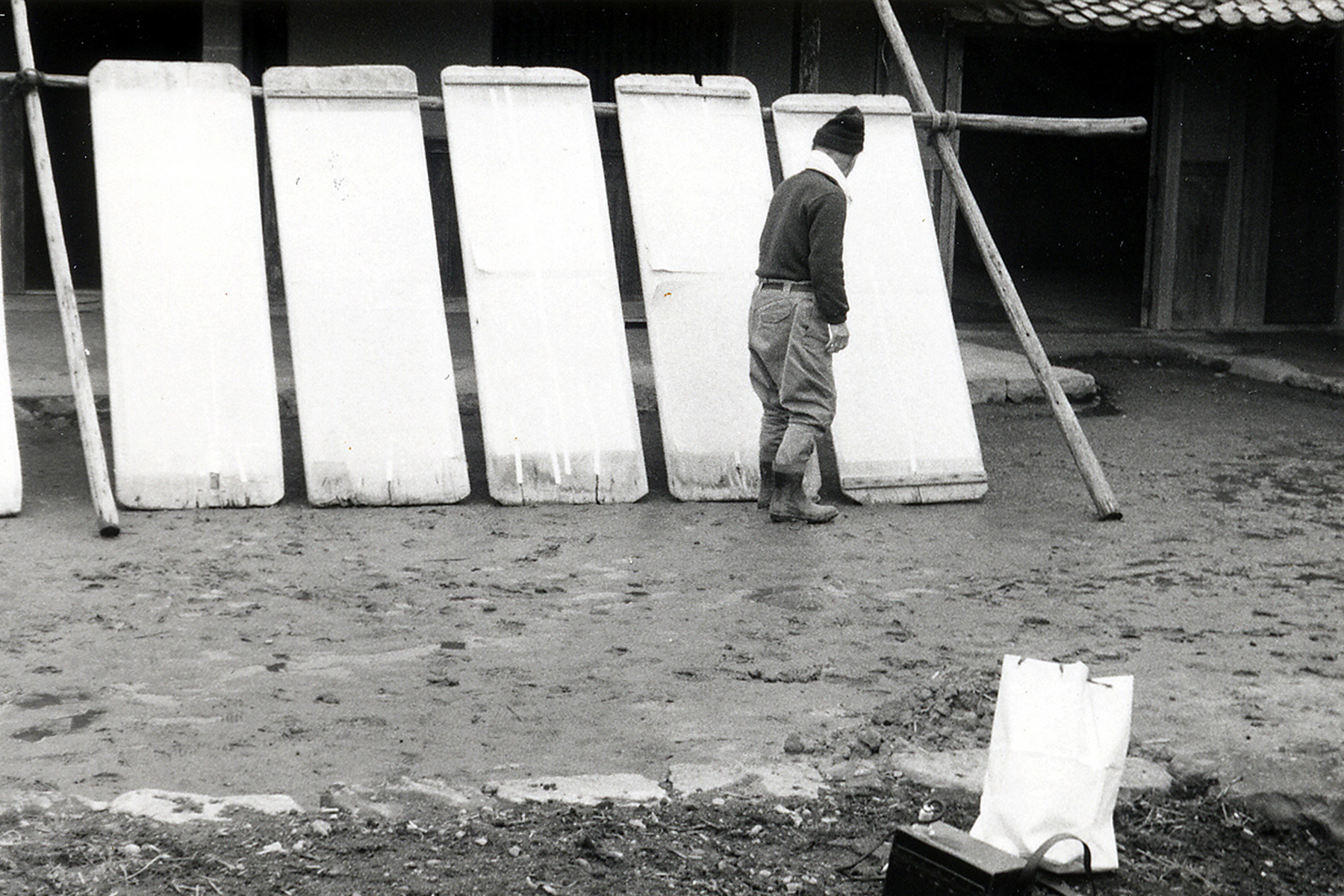 The phantom paper from Sugihara was revealed to the world again through the Japanese paper research led by Bunsho Jugaku.
On August 2, 1940, Bunsho Jugaku and Izuru Shinmura (both now deceased) who were members of the Japanese paper research society visited the Sugiharadani village in search of the roots of the Sugihara paper. Later, they proved that the Sugihara paper actually started from that area. As a result, Sadao Fujita (now deceased), a local history researcher from that town, was deeply fascinated by that and had continued his own research since then.
Around 1965 when Japan achieved high levels of economic growth, movements to honor the famous Sugihara paper with a glorious history began to emerge. The Japanese Paper Research Society was launched by volunteers, and in 1966 “The Sugihara Paper Birthplace” monument with the title written by Mr. Shinmura and the epitaph by Mr. Jugaku was installed on the territory of the Sugiharadani Elementary School. In 1970, Mr. Fujita published a collection named “Sugihara Paper. The History of Harima Paper” after having conducted his research for over 30 years. Also, in the same year, Mr. Udaka Yanosuke succeeded in reproducing the Sugihara paper manufacturing method for the first time in about half a century.
Then, in 1972, a municipal facility “Sugihara Paper Laboratory” run by the town was established to resume full-scale papermaking.

The Report since the Revival

At the beginning when the Sugihara Paper Laboratory was just established, tools and technology had to be recreated from almost zero. Papermaking was started from acquiring papermaking tools from manufacturers who went out of business and from buying mulberry, which is the raw material, from other regions. With the support and technical guidance of Kyoto’s Kurotani washi craftsmen, several researchers worked hard from day to day while going through trial and error. And as the result of that repeated research, a designation as the important intangible cultural property of Hyogo Prefecture was received in 1983 and the new Sugihara paper was even designated as Hyogo Prefecture’s traditional craft in 1993.
As for the mulberry, local volunteers were asked to cultivate it, so the cultivation area had gradually increased, and with the aim of further raising the self-sufficiency rate, whole villages and groups such as senior associations also began working on cultivation. Also, in cooperation with urban development groups, the “one house, one tree” cultivation movement with unique nationwide participation of every household had started from 1995. Currently, mulberry is almost completely grown locally.
Even today, the only place where the Sugihara paper is being produced is the Sugihara Paper Laboratory. Due to great cooperation from the local people, the paper has gained many fans, so the papermaking project can be carried out without interruptions.
“The large cultural project by a small town” advocated by the mayor at the time of the inauguration of the laboratory acquired a certain form and has been around until this day. We will continue to produced Japanese paper to make it a pride of this town again and to bring back the bustling days of the past. 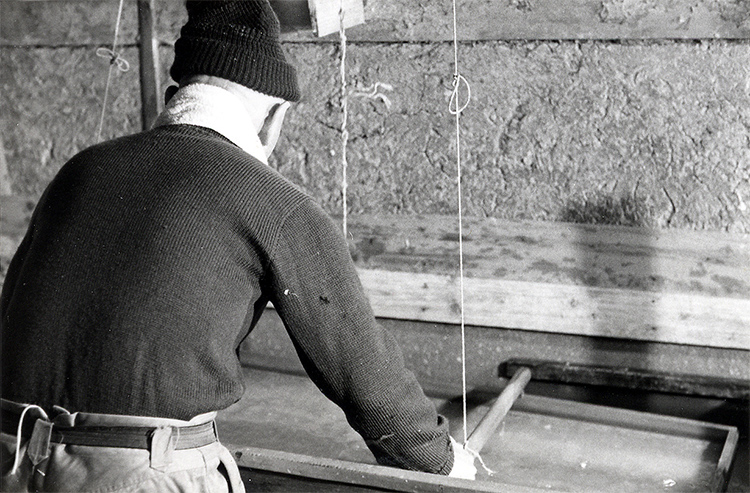 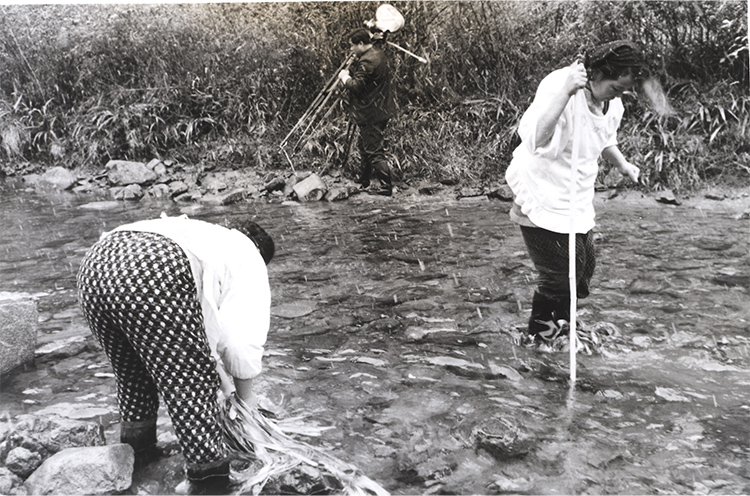